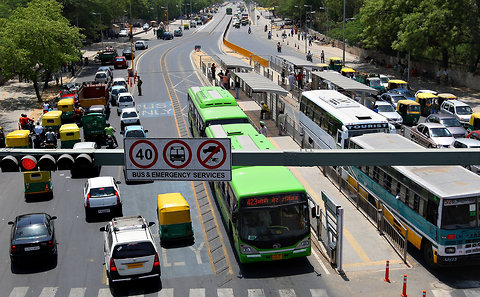 In a landmark ruling that overturns conventional traffic engineering approaches, the Delhi High Court on October 2012 advanced the idea that transportation facilities are for moving people, not cars, and should favor all users, not just the minority fortunate enough to use private cars. In addition, it advocated introducing measures that move people out of cars and into public transportation.

The ruling dismissed a petition demanding that the bus corridor from the Moolchand intersection to Ambedkar Nagar in New Delhi be scrapped to create more traffic lanes for private vehicles. The petition, filed earlier this year by Nyaya Bhoomi, claimed that the bus corridor was aimed at harassing commuters and was a waste of public money. It said it resulted in increased travel time for car users and longer idling time due to traffic jams, resulting in wastage of fuel.

The case received extensive media coverage and was widely debated, with several arguments for and against the bus corridor presented. Interestingly, the issue also sparked commentary on the inherent class divisions in Indian society, where the rich minority seems to possess a sense of entitlement over a majority of the public resources.

In 2009, an assessment of the corridor by Embarq, which was used by the defense counsel in the court hearings, revealed that commuters using the corridor as part of their journey benefited from it, and that the delays in general traffic were offset by the reduced travel time for bus commuters.

However, transportation experts agreed that the corridor left a lot to be desired. The assessment also indicated that the 5.6-kilometer corridor was not a full Bus Rapid Transit (B.R.T.) system, as it lacked most of the critical features of such systems. It also recommended improvements in many areas, particularly the introduction of performance indicators and monitoring systems. The report suggested measures to enhance operations, communications and branding, and also recommended that the corridor be extended to Delhi Gate, as originally planned. However, these recommendations were not implemented.

Another assessment, as a result of a court order, compared the bus corridor with other corridors, and found that the corridors without central bus priority lanes fared better in terms of traffic movement. The court, however, dismissed that report, stating that the comparison was faulty, as the traffic volumes and passengers on the corridors chosen for the study were unequal. It was a traditional traffic engineering study about vehicle movement, rather than people transported.

Without disregarding the flaws of the bus corridor and the changes that could be made to improve the flow of traffic at critical intersections, the judges, Pradeep Nandrajog and Manmohan Singh, dismissed the petition to let all traffic use the exclusive bus lanes.

They reasoned that since a bus could transport up to 200 persons in the course of one journey, as opposed to a car, which would transport 3 or 4 persons, it was not irrational to assign dedicated road space for buses. In fact, what does appear irrational is that when more than 50 percent of road users travel by bus, 98 percent of Jawaharlal Nehru National Urban Renewal Mission grants from the Ministry of Urban Development have been spent on the expansion of roads, construction of flyovers and parking projects, in which the primary targeted beneficiaries are cars. A mere 2 percent has been spent on other transportation projects.

The Delhi High Court also recognized that the larger problem of traffic congestion was because of the growing number of vehicles in the city – currently over seven million. It would be unfeasible to further augment the city’s already extensive road network, which accounts for 21 percent of its geographical area and includes 46 flyovers, to accommodate this alarming increase in the number of private vehicles, the judgment said. The only sustainable solution would be to improve Delhi’s integrated public transportation system to include high-capacity mass transit options, like B.R.T. These improvements would urge a shift in the “mode shares” or the percentage of people traveling by public and private transportation.

This ruling comes at a critical point in the evolution of B.R.T.’s in India, when several cities are exploring the viability of B.R.T.’s to enhance their public transportation systems. As a result of this ruling, and with support from the newly formed Asia B.R.T.’s Association, which is an international network of Asian cities, transit authorities, operators, policy- and decision-makers, technical institutes and representatives of the public manufacturing and service industry, the path has been paved for additional B.R.T. projects around the country to be planned and implemented. While bus priority is good, a B.R.T. is much more than buses and bus lanes. A systematic approach has made the B.R.T. successful in many cities around the world.

Dario Hidalgo and Madhav Pai are directors at Embarq, the urban transportation program of the World Resources Institute. Embarq is headquartered in Washington and works in India, China, Brazil, the Andes, Mexico and Turkey. Dario Hidalgo is also member of our BRT Centre of Excellence