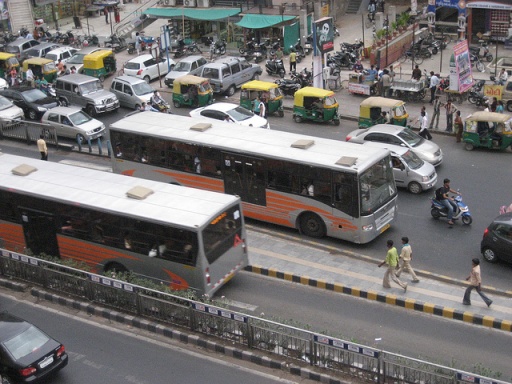 Ahmedabad’s Janmarg is a world-class BRT system. Photo by velaparatodo.

The Ahmedabad Municipal Corporation, along with CEPT University, launched the Asia BRTS Conference that was held on September 6-8, 2012, with the goal of improving knowledge, sharing experiences and advancing the concept of bus rapid transit (BRT) in India and across Asia. Currently, more than 25 Asian cities have implemented BRT systems and bus corridors, with varying degrees of success; and many more are at different stages of planning and implementation. The conference comes at a critical point in the evolution of BRTs in Asia. Recognizing that while existing debates have focused on architecture and engineering, there is a lot to learn from successful cities about engaging stakeholders, branding and communication, network selection, and operations planning.

The conference had local and international experts, including those from the Ministry of Urban Development, the Asian Development Bank, the Clean Air Initiative for Asian Cities, the Latin American Association for Integrated Transport Systems and Bus Rapid Transit (SIBRT), the International Association of Public Transport (UITP), and EMBARQ. The Asia BRTS Association (ABA) was launched as an international network of Asian cities, transit authorities, operators, policy and decision-makers, technical institutes, and the public transport manufacturing and service industry.