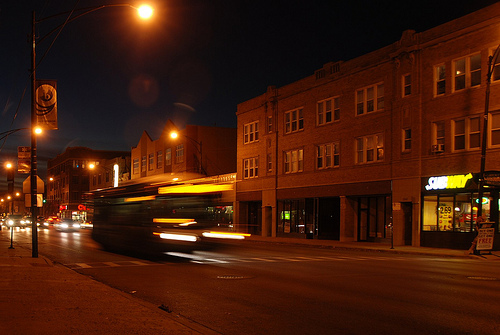 CTA riders who take a Jeffery Boulevard bus on the South Side could see their commutes shortened by up to seven minutes during rush hour, under the proposed bus rapid transit plans the CTA unveiled Wednesday.

It takes the No. 14 Jeffery Express about 71 minutes, 30 seconds to travel from 103rd Street and Stony Island Avenue to Washington and Jefferson Streets in peak hours, the CTA estimated.

That commute time would be cut to nearly 65 minutes if bus-only lanes were implemented on the South Side of Jeffery Boulevard and buses on that street got priority in traffic over cars, the agency said.

The CTA showcased its bus rapid transit plans at an open house Wednesday in Avalon Park. The CTA was awarded an $11 million federal grant last year to test bus rapid transit on Jeffery Boulevard. The CTA is in the design phase of the project. Construction is expected to take place spring through summer next year with service anticipated to begin in fall 2012.

Antonio Reed of Englewood said it takes him about an hour to ride the No. 14 bus everyday from 95th Street and Jeffery Boulevard to State and Madison Streets.

“I like the project but I’m still trying to figure out what it will look like overall,” said Reed, 19.

Meanwhile, the Active Transportation Alliance, which advocates for walking and bike and transit riding, said it’s on board with the bus rapid transit proposal.

“The new BRT elements that the CTA is implementing on the Jeffery Corridor are exciting improvements to service for riders and a big step forward toward implementing a full-scale BRT network in Chicago,” said Lee Crandell, the group’s director of campaigns.

Among the CTA’s proposals: