Chicago Will Let Buses Ride the Shoulder to Beat the Rush

When the going gets tough on Monday in Chicago, the buses will get going. The city is introducing a pilot program that will allow buses to use the shoulder on the Stevenson Expressway (Interstate 55) to avoid rush-hour traffic. The effort will go into effect for two bus routes that connect the southwest suburbs of the city to the downtown area and the Illinois Medical District: 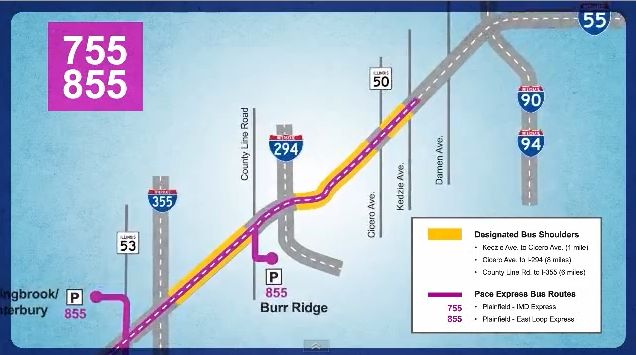 On the surface, Chicago’s “Bus on Shoulder” program sounds like a fairly radical plan. Actually, a number of cities across the country – including Washington, D.C., Seattle, Miami [PDF], Atlanta, Columbus [PDF] and others – have implemented similar efforts over the past 20 years. The practice isn’t limited to the United States either. Toronto, Vancouver, Dublin and Auckland have all let buses traverse their highway shoulders in recent times. As cities struggle to fund transit projects, and search for low-cost alternatives as a result, bus-on-shoulder programs stand to grow in popularity.

The premise behind the programs is to improve travel times in key transit corridors, thereby reducing congestion and encouraging people to ride public transportation. Creating a dedicated bus lane isn’t a possibility on many urban highways. By giving buses a way around tight traffic, officials are helping improve the reliability of the travel mode.

That not only satisfies bus riders, it also has the potential to attract drivers. As one recent Federal Transit Administration report [PDF] on bus-shoulder programs around the world put it:

The marketing and psychological message of buses passing motorists stuck in traffic congestion tends to be powerful.
… Although the actual speed was only 5 to 15 mph faster than the adjacent automobile traffic depending on the traffic conditions at a particular location on the route, the impression passengers get is of a much faster speed because they see themselves passing so many cars.

Chicago’s program is modeled on a similar effort that’s been operating for decades in Minneapolis-St. Paul. The Twin Cities adopted the idea on a six-lane highway in 1991, and liked it so much they expanded its reach by 10 to 30 miles a year. At the end of 2006 the Twin Cities had 271 miles [PDF] of active bus-shoulder lanes, roughly 10 times the rest of the country combined, with more planned for the future.

As the growing mileage suggests, the Twin Cities program has been a great success. A study from the late ’90s found that overall bus ridership increased 9 percent in areas with bus-only shoulder lanes — at a time when transit ridership was down 6.5 percent systemwide. Other program reviews have reported a travel savings of around seven minutes during rush hour. During inclimate weather, particularly heavy snows, that savings increases to nine minutes.

Of course there are some ground rules. The buses are only allowed on the shoulder when the general highway flow drops below 35 miles per hour during peak-congestion periods. They must adhere to a maximum speed of 35 or 15 mph more than the neighboring congestion — whichever is slower. So if traffic grinds to a halt on the Stevenson on Monday, buses can cruise the shoulder at 15 until either it passes the congestion or the other lanes get moving again. (The 35 mph limit was introduced by the Twin Cities program after officials piled bus drivers into a room and asked them how fast they felt safe driving on the shoulder. At 40 mph some started to note their discomfort, so 35 mph it was.)

Initially the use of shoulders for bus traffic raised some legitimate safety concerns. If buses are cruising the shoulders, there is less room on the highway for disabled vehicles, emergency personnel, and construction staging. In bus-on-shoulder programs, cars can still pull into the shoulder for emergency purposes, and buses have to manuever around them. A greater concern is shoulder width. Many urban highway shoulders are only 10 feet wide — nearly the width of most buses. The tight fit often worries drivers in neighboring lanes, a fear that’s already surfaced among Chicago car commuters. But the history of bus-shoulder programs shows a solid safety record. In the past 10 years, there have been only 20 accidents involving buses involved in the program, and the only damage has been to property, according to the Minnesota Department of Transportation.

As far as bang for the taxpayer buck, the bus-shoulder programs are hard to top. The per-mile cost of implementation has varied in the Twin Cities. If a shoulder is wide enough to handle buses and its drains are in good shape, the cost can run as low as $1,500 a mile; if shoulders must be widened and repaved, and lanes re-striped, the costs can creep toward $66,000 a mile, topping out near $100,000. But even that top range compares favorably with other transit options: light rail construction runs in the tens of millions, and even bus-rapid transit in the low millions. There are some additional costs for signage and bus-driver training. But overall bus-shoulder projects are remarkably cost-effective.

Chicago has seen all the potential in previous bus-on-shoulder programs, and raised them. Pace, which operates the buses for the Chicago program, is upgrading its coaches in the corridor to include amenities like upholstered seats, bike carriers, and even free Wi-Fi. The company hopes to double its ridership, largely by attracting drivers onto the bus. “Right when you’re filling up your car, putting $30 or $40 in, we’ll give people an alternative,” a director told the Chicago Tribune. “‘Maybe I will take this bus downtown.'”