There is a lot of talk throughout the United States about transit-oriented development (TOD). The term describes the planning of private development around station areas for new transit system investments, a process that often involves some form of public-private partnership to achieve the goal of adding density of housing, jobs and services around station nodes. In some U.S. cities, TOD is fraught with complications due to the often conflicting goals of the transit agency, the local governing jurisdictions and private developers. For example, the Seattle transit agency Sound Transit is investing $16 billion in capital costs for a second phase of regional rail investments, but the level of density achieved in station areas is often lower than the market potential due to concerns of neighbors and lack of vision and leadership to fully address long-term regional growth trends and needs.

The strategic error of conventional TOD is that the business model often completely neglects the importance of creating a built-in, long-term customer base for the taxpayers’ massive capital investment. Instead, project sponsors often cave to the pressure of a small minority of vocal individuals, rather than looking out for the good of the transit ballot community and the economy at large. The result of this surprisingly short-term focus for such massive, long-term public investments is an unrecoverable, lost economic opportunity. Communities spending billions of dollars in new rail investments are left with few ways to finance the non-transit infrastructure required to make the necessary new density at transit nodes livable.

Without enough customers, new measures will often fail, or perhaps even worse, the costs to taxpayers of the approved transit investments will skyrocket over time.

In Hong Kong, where station-area planning has dominated the development landscape for more than three decades, the region’s public agencies and developers face the opposite of the lost opportunity problem. Driven by a much different land ownership scheme, where government owns nearly all land and sells development rights to private companies on a land-lease basis, the dominant concept is not transit-oriented development but development-oriented transit.

There is a lot of discussion about the development around rail stations in Hong Kong, as sky-high towers above dense retail podiums are springing up atop rail stations throughout the city. The intensity of use achieved through the development-oriented financing scheme appears to be the ultimate manifestation of good planning practices, but the outcome of these developments are seeing mixed reviews. The partnership typically works like this:

The towers above the rail stations house high-end shopping malls, hotels, restaurants, housing and more. Profit from these private developments offsets the capital cost of the station development. Therefore, the only expense left for the stations is the cost of day-to-day operations. It’s a financially sustainable transit option—practically unimaginable in North America. The relatively small ongoing costs, paired with the increase in rail customers served by the new stations, results in surprisingly cheap fares for rail users. The low cost to users is an added bonus to riders and a key to the system’s success.

The primary measures of project success used by the transit agency and local government are the amount of agency revenues, in both the short and long run, that are received from the overall development activity (transit infrastructure + private development) and the number of system customers that can be accommodated in the new station area with supporting housing, jobs and services. The end result in the urbanized areas of Hong Kong is often huge, multi-story station podiums filled with retail and services, coupled with large towers of residential and commercial uses.

Architect Eugene H.K. Leung, who researched the podium developments as a graduate student at the Chinese University of Hong Kong, calls the station nodes “the new cathedrals of the city” because they become centers around which development occurs and communities congregate. As the importance of these developments in the city’s urban fabric continues to grow, the controversy around them is magnified. These monolithic structures are extremely productive financially for the transit agency, the local government and the developers. However, more often than not, these mega-projects fail to meet the needs and goals of individuals who interface with the project at the pedestrian level. 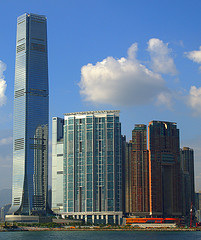 According to Dr. Sujata Govada, a leader in Hong Kong’s urban design community, the block-style mega-developments — particularly those that swallow up existing portions of granular street grid — have been a major cause of the Hong Kong population’s awakening interest in planning and urban design. Activists in this realm range from academics like Leung, to industry professionals, to neighborhood concern groups. While that’s not unusual for U.S. cities, where public comment processes are often fundamental to land use (and “NIMBY-ism” is often a stubborn roadblock to innovative development and land use), it’s something of a breakthrough for Hong Kong, where opposition to development has historically been seen as opposition to progress and economic growth.

Stakeholders from various backgrounds are working to answer one fundamental question: how might two seemingly irreconcilable approaches to the same basic problem be resolved?

The remedy might be as simple as re-framing the goals for these types of developments. In his master’s thesis, “Transportation Hub as the New Urban Center,” Leung proposes just such a solution. He suggests adding another metric to the conventional, financial success criteria of the development-oriented transit project: permeability of the public pedestrian zones at the station podium. Rather than having the podium act as a fortress against the surrounding neighborhood, as is the case at many of Hong Kong’s most urban stations, Mr. Leung’s solution creates a net to draw in people from the community surrounding the project.

Whatever the dominant framework for planning development around transit—whether it is the U.S. model or the model prevalent in Hong Kong—this emphasis on the internal and external customers of a development allows success to be realized by the greatest number of project stakeholders. A permeable design fortifies the fabric of the neighborhood as a whole, which fulfills an important function of TOD. Meanwhile, the economic opportunity to minimize the taxpayers’ share of the transit investment is still fully realized through maximizing the value of land development rights sold or leased to private parties within station areas. The ultimate outcome of this customer-centric approach to station area planning should be lasting sustainability for TOD investment financially, as well as socially.