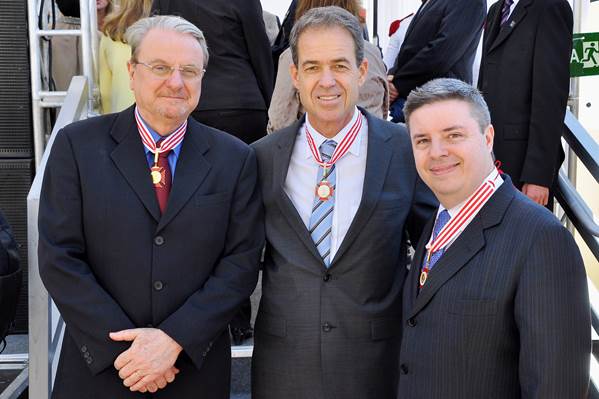 On September 12th, EMBARQ Brazil’s Director, Dr. Luis Antonio Lindau, was awarded the President Juscelino Kubitscheck Medal of Honor, by the Governor of Minas Gerais, Antonio Anastasia, and the former president’s daughter, Maria Estela Kubitschek. The award is named for President Kubitschek, who, among other things, is credited with envisioning and building the city of Brasilia. Lindau received the award in recognition of EMBARQ Brazil’s work to improve public transport in the city of Belo Horizonte.

Lindau was named to receive one of the most notorious state honors by the governor of the State of Minas Gerais and the mayor of Belo Horizonte, Marcio Lacerda, in recognition to EMBARQ Brazil’s work in partnership with BHTrans – the public organization responsible for transport services in Belo Horizonte. EMBARQ has worked on the project since 2010, aiding with BRT project development in the state capital, which will be launched early next year.

About 60% of EMBARQ Brazil’s recommendations on the Road Safety Audit reports were accepted by the city. Thanks to EMBARQ’s work, the Belo Horizonte high capacity bus system will be safer for the population.

“I welcome this Medal of Honor with huge satisfaction as recognition for the work developed by the EMBARQ Brazil team with BHTrans in the past years to implement a high quality BRT system in Belo Horizonte,” said Lindau as he accepted the award. “It’s been such a pleasure to work in partnership with a city like Belo Horizonte, whose Mayor prioritizes sustainable transport and urban mobility with the competent technical BHTrans staff. I appreciate the honor and assure you that we will keep working to improve the quality of life for the welcoming people of Minas Gerais”, thanked Lindau.

The traditional ceremony that honors the former President occurs every September 12th in Diamantina, Minas Gerais, hometown of Juscelino Kubitschek. President Kubitscheck envisioned Brasília and made it a reality in 1950. “Kubitschek led the most important structural changes in Brazilian history, especially on transport infrastructure and energy; he had those goals even before being President,” said Geraldo Alckmin, governor of São Paulo and the speaker for the occasion.

The governor of Minas Gerais, Antonio Anastasia, granted the honor to 120 people and organizations that have provided relevant services to society, contributed to the improvement of governmental organizations, and aided the City, State or Country development.