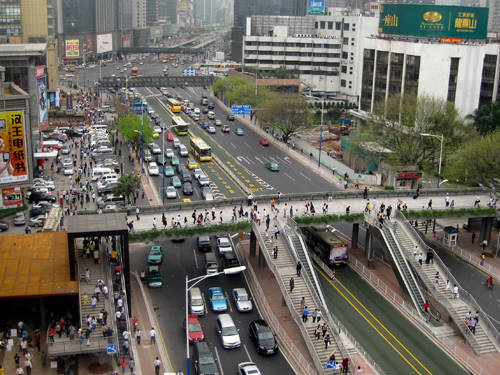 Guangzhou, China opened its first, 22.5-kilometer Bus Rapid Transit corridor in 2010 in an effort to cut congestion on one of the city’s busiest roads, Zhongshan Avenue, and to improve the efficiency of the city’s bus system. The Institute for Transportation and Development Policy issued preliminary findings from a new study showing the Guangzhou BRT has done this and more.

Key findings of the study include:
– Travel times have improved for motorists and bus riders along the corridor 20% and 29% respectively.
– The system now has 805,000 daily boardings. It is carrying more passengers per hour than any metro line in mainland China outside of Beijing, and more than triples the capacity limits achieved with any other BRT system in Asia.
– The system will reduce Guangzhou’s CO2 emissions by 86,000 tonnes annually, mostly through improved bus operations efficiency.
– The project includes a new greenway parallel to the BRT corridor and a 5,000 bike public bike share system. Bicycle ridership is up approximately 50% since the corridor opened.

Karl Fjellstrom, Vice Director of ITDP says, “The Guangzhou BRT system expands the menu of options available to mayors seeking high quality transit systems to address congestion, showing that BRT can meet the needs of even the highest demand corridors in the largest cities. The project has been a huge success with the public, increasing satisfaction with public transport in Guangzhou from 29% to 65% since the project opened.”

With rapid increases in wages and standard of living, private vehicle ownership in Guangzhou has increased 22% annually over the past five years (over 310,000 new cars in 2010 alone). Still nearly half of residents, or over 7 million people rely on mass transit. This project helps meet this high demand and maintains transit as an attractive option. It also serves as a model for other cities throughout China and around the globe, of a high-quality, cost-efficient transit solution.

The study is available online here. This is the first part of a longer-term monitoring and evaluation program for the Guangzhou BRT. It focuses primarily on the system’s impacts on CO2 and air pollution.