Euclid Avenue in Cleveland connects the two largest commercial districts in northeast Ohio: downtown Cleveland and University Circle. A microcosm of the city itself, the corridor has experienced extreme highs and lows throughout its history. At the turn of the 20th century, Euclid was known as Millionaires’ Row and was home to the founders of Standard Oil and General Electric. But by the time the Great Depression ended, the avenue was devastated. During the 1950s, its streetcars were dismantled. By the 2000s, the corridor was depressed, lined with dilapidated buildings and vacant lots and evoking a sense of hopelessness.

But Euclid’s role as an essential link between the central business district downtown and University Circle—a hub of world-class medical facilities and arts and culture amenities—rendered the corridor impossible to ignore. Starting in the 1970s, a nearly 30-year debate focused on how to integrate rapid transit along Euclid Avenue. Finally, in 1998 the city set aside prohibitively expensive rail plans and decided to move forward with bus rapid transit (BRT).

The resulting $200 million, 6.8-mile (11 km) Euclid Corridor Transportation Project catalyzed a powerful transformation along the avenue. Since the BRT line opened in 2008, the corridor has attracted $5.8 billion in investment—$3.3 billion for new construction and $2.5 billion for building rehab, together totaling more than 110 projects. Disproving naysayers and exceeding the expectations of supporters, the project has generated the economic growth that many thought could only be achieved with rail—and at a fraction of the cost. In 2011, the project won a ULI Award for Excellence.

By connecting downtown with University Circle, the BRT service contributes to the unification of Cleveland’s top economic generators across the entire city. The Cleveland Clinic and University Hospitals of Cleveland — the city’s two biggest employers — purchased naming rights to the BRT line in a 25-year, $6.25 million deal. Dubbing it the HealthLine ties the service to Cleveland’s branding as a hub of medical care and research. By physically linking large hospitals, startups, convention space, and cultural amenities, the corridor is propelling Cleveland’s evolution into a world-class destination for the health care and biotech industries.

Implementation was made possible by a complex funding partnership of multiple organizations, including the Regional Transit Authority (RTA) as the project sponsor, the New Starts program of the Federal Transit Administration (FTA), the Ohio Department of Transportation, the Northeast Ohio Areawide Coordinating Agency, the city of Cleveland, the Cleveland Clinic, and University Hospitals. Of the $200 million invested in the project, $168.4 million for the transit component was provided by the full funding grant agreement (FFGA) with the FTA. The remaining $31.6 million went toward nontransit improvements, including sidewalks, utilities, and public art.

Although the Euclid corridor project secured funding in 2004, the project still struggled to gain initial widespread support. One major challenge was the notion that a bus line would not attract the professional community, instead driving the area’s social problems along Euclid Avenue further into the downtown and University Circle districts. Developers and community members also questioned the project’s ability to stimulate economic growth significantly.

In response, the RTA and the design team — prime consultant Wilbur Smith Associates of Cleveland and planning and landscape architect Sasaki Associates of Boston — adopted a strategy of “thinking rail while using bus.” Dedicated bus lanes free the buses from the interference of other traffic. From downtown to University Circle, buses run along exclusive lanes in the center of the street, which results in greater efficiency. “From Public Square [downtown] to University Circle, we reduced travel time from 30 minutes to 20 minutes,” says Michael J. Schipper, RTA deputy general manager for engineering and project management.

Additional features include prominent stations, raised station platforms that match the height of the bus floor to allow same-level boarding, real-time updates of bus arrival times, and off-vehicle fare collection—all of which imbue the HealthLine with the sensibility of an urban rail line. Having fewer stations improves travel times, and platforms in the road median reduce encroachment on the sidewalks. The stations, designed by Robert P. Madison International Inc. of Cleveland, are modern and transparent, constructed of glass and stainless steel, and designed to support the public realm by creating their own identity that reinforces the entire corridor and transit rather than mimicking a certain period or architectural style represented in the neighborhoods the line traverses. They are well-lit and are equipped with emergency blue-light phones and closed-circuit security cameras.

The HealthLine operates 24 hours a day, seven days a week. On weekdays, buses arrive at stations every ten minutes from early morning into the evening. During peak service periods, arrival frequency shrinks to every seven minutes. Such rigorous service levels make the HealthLine a convenient and reliable transit option.

The corridor accommodates multiple modes of transit by incorporating exclusive bike lanes and pedestrian-friendly sidewalks and street crossings. The bus-exclusive center lanes allow parking to be integrated back into the street, supporting efforts to revitalize retail storefronts. Providing visual interest are seasonal plantings that provide splashes of color in the medians; colorful and rhythmic pavement striping in the sidewalks that provide human scale; and distinctive lighting elements—a custom light created for downtown medians; small bump lights in the median outside of downtown that cast a low, wide light that illuminates the center of the street; and lighting of trees in wide, planted medians. Public art installations are integrated into street design along the corridor, including pavement patterns in the crosswalks, stone patterns in the street, iron castings for tree grates, and a few stand-alone sculptures illuminated by light-emitting diodes at night.

The project required strategic partnerships among diverse interests—public, private, nonprofit, and neighborhood. To determine and satisfy the interests of various stakeholder groups, the RTA held about 2,000 public meetings. One design solution that engendered widespread community support was to address the eight distinct neighborhoods in the corridor individually. Though some design elements, such as the station shelters, lighting, and pavement materials, are consistent along the entire corridor, other elements—shelter size, light configurations, pavement patterns, and tree species—are distinct to identify the different neighborhoods.

Ridership has increased steadily over the years and now totals about 15,100 people per day. “The bulk of riders are commuters, but we are experiencing a big uptick in midday ridership,” says Schipper. In response, the RTA is extending the service’s peak hours to accommodate more riders.

The link between downtown and University Circle provided by the HealthLine fortified the idea for the Cleveland Health-Tech Corridor, an initiative launched in 2010 that spans three miles (5.8 km) and encompasses ten neighborhoods. Created by BioEnterprise, a biosciences business incubator, and Midtown Cleveland, an economic development corporation, the Health-Tech Corridor seeks to attract and support businesses downtown, along Euclid, and in University Circle. Baiju Shah, BioEnterprise president and CEO and a self-described convert regarding the HealthLine, was persuaded by the “well-designed planning process that tied into a compelling business proposition.” Today, Shah considers the HealthLine a force spurring developers to locate projects along the corridor.

One of the most visible ventures along Euclid is the $28 million MidTown Tech Park, which opened in summer 2011. MidTown Tech Park has 128,000 square feet (11,900 sq m) of state-of-the-art incubator space located on the former site of a used car dealership in Midtown, once one of the most downtrodden neighborhoods along Euclid. Ravaged by civil rights protests in the 1960s, the area had been largely ignored since. Substantial development in Midtown so soon after completion of the HealthLine was unanticipated, Schipper says. “We wouldn’t have expected this type of thing until five or so years out,” he says.

JumpStart, a nonprofit venture development organization, was the first tenant of MidTown Tech Park. “Midtown is increasingly becoming a hub for entrepreneurship—particularly young biomedical companies—and we were excited to be contributing to that energy while adding to the growing vitality of Cleveland’s urban core,” says Ray Leach, JumpStart chief executive officer. “And now many of the incubators, tech companies, higher-education institutions, and world-class health care are connected not just in missions and interests, but by a physical corridor developing around the HealthLine.” 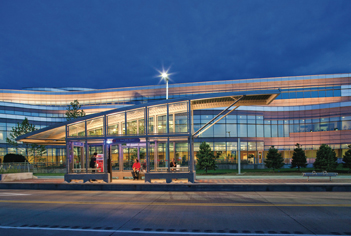 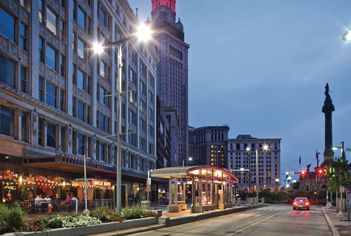 Cleveland HeartLab, which makes a biomarker-based heart test, is one of MidTown Tech Park’s newest tenants. According to the Cleveland Plain Dealer, the company has grown from eight to 80 employees over two years and likely would have left the area were it not for the new developments along Euclid.

In addition, construction of about 5,100 housing units has augmented the corridor’s revitalization.

New developments are also proliferating at either end of the HealthLine. Adjacent to University Circle, the Uptown district is home to the new $27 million Museum of Contemporary Art. Downtown, the Cleveland Medical Mart & Convention Center, targeted to the medical and health care industries, is scheduled for completion in 2013.

The HealthLine has not only created employment opportunities, but also has changed the way people think about transportation and job location, says Lillian Kuri, program director for architecture, urban design, and sustainable development at the Cleveland Foundation, a community foundation providing leadership advocacy on strategic initiatives for the city. “It has raised consciousness about making sure jobs are accessible to low-income residents,” she says. Employers are strategically locating to be accessible by public transportation as a way of attracting talent—something commonplace in major urban districts but often ignored in medium-sized, car-centric cities.

The HealthLine has precipitated an economic development strategy not just for the corridor, but also for the city. The project has brought about the partnerships necessary for Cleveland to make a transition from an industrial economy to a knowledge-based economy, building on the strength of education, research, health care, and tourism. Euclid Avenue supports the ventures that comprise this new economy, as well as housing, retail businesses, restaurants, and entertainment venues. The corridor is vibrant with possibility as a place for people to live, work, and prosper, and serves as an example for similar cities in the United States and around the world.