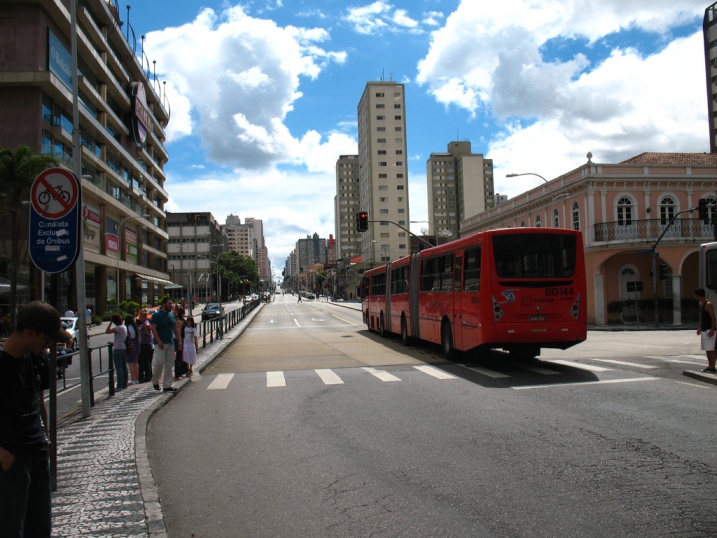 “More than 70 percent of people in Rio de Janeiro already use public transportation; most people use buses,” Rio de Janeiro’s Secretary of Transport Alexandre Samson said at the opening session of the “Marketing BRT: How to Attract and Captivate Users” workshop, held on May 25-26 in Rio de Janeiro. “Our biggest challenge is to rationalize and structure the system.”

Bus rapid transit, which originated in Curitiba in the 1970s, remains prominent in Brazil, but its environmental and social benefits are still not fully known or understood by the public.

“BRT must be sold as a product that has importance to the city, not just to the operators or those directly involved, like the manufacturers,” said Lellis Teixeira, president of Fetranspor, a federation of 10 bus syndicates responsible for 81 percent of public transport in Rio de Janeiro. ”It goes beyond that because BRT allows for the re-organization of the entire city.”

In the lead-up to the 2014 World Cup and 2016 Summer Olympics, Brazil has been working diligently to upgrade its urban infrastructure, with a special focus on BRT. The country’s rapid economic growth, too, has required massive investments in improving mobility for people living in fast-growing cities. The country already has 20 cities with more than 1 million people.

“We must show the population that the only possible path to quality of life will involve mass transit,” Teixeira continued. “BRT represents a change of paradigm. It will attract car users to public transportation and thus we will save time, lessen the costs of road maintenance, and reduce pollution.”

Marketing the concept of BRT has become even more important now that the city is developing four new BRT corridors, in time for the 2014 World Cup. Undersecretary of Transportation for the Municipality of Rio de Janeiro Carlos Maiolino stressed the importance of continuing to invest in high quality public transport, such as the city’s TransOeste, an east-west BRT corridor currently under construction. Another planned corridor, TransCarioca, will link Barra da Tijuca to the Tom Jobim International Airport.

Many people are still unfamiliar with the concept of BRT, which poses a communications challenge for the local transit authorities.

“The word ‘marketing’ for transport might not even be the adequate word,” Secretary of Transport Samson said. “We have to educate people and clarify and explain to people the benefits of public transportation.”

Rio has initiated a transport project called Bus Rapid Service (BRS), which borrows some of the elements of BRT, such as segregated bus lanes, in an effort to relieve congestion and cut travel times. Only taxis, emergency vehicles and police cars are allowed to use the corridor. To implement the new system, the city launched a marketing initiative to brand the new corridors and make it easier for passengers to hop on board.

Below is a summary of some of the efforts that were made to ensure the system’s success, as explained by Edmundo Fornasari, the executive director of business for RioCard, a smartcard system used for public transport in the state of Rio de Janeiro:

Small Gestures
Little details make a big difference in establishing customer loyalty. For example, BRS employees distributed roses to women with children on Mother’s Day this year, generating extremely positive feedback from the users. “It was a small experience that shows how you aggregate value,” Fornasari said.

On the Street
BRS staff often go out into the streets to distribute flyers and pamphlets with important information and answer questions from passengers. For example, when some existing bus stops were removed from the corridor during the development of the re-organized routes, BRS deployed its employees to explain how the new changes would affect people’s commutes, especially targeting youth and the elderly.

Open to Feedback
Fetranspor displays a customer service toll-free number behind all its buses to give users feedback on quality of service—and it’s completely voluntary. Fornasari said 80 percent of calls are about trip itineraries and schedules, with some occasional driver complaints.

One Thing at a Time
“You have to promise one thing at a time and you must not make big promises because the public is not prepared for great transformations,” Fornasari said. “If I delivered what I promised, my product is considered good; otherwise I cause frustration.” BRS’s marketing promise was that it would provide more-than-average speed. The promise was fulfilled: average travel times have been reduced by 11 percent to 13 percent.

Emotional Appeal
BRS works conscientiously to incite people’s desire to use public transportation, especially the youth’s, who may one day desire a car, Fornasari said.

The new BRS system does its best to maintain an image of being fast, cheap, clean and safe. BRS distributed pamphlets and advertisements encouraging people to ride a bus down the notoriously long stretch of Copacabana, displaying the iconic lifeguard stations as being very close together. “It was an emotional appeal where we make people feel like Copacabana is smaller.”

At first, Fornasari said, there was some resistance to the name “BRS,” considering they are more accustomed to “BRT.” “People were wondering, ‘What is this? This doesn’t make sense!’ he said. But after some time, and a conscious marketing push, the public’s perception fo the system is improving.

“Regardless of what it means, the name is successful,” Fornasari continued. “This is BRS: the fast bus.”

User-Friendly
Sharing customer service information and data in a simple and visually appealing way is one of the key elements of creating good user information systems.

Before BRS re-vamped the corridors, only 0.29 percent of bus stops had information, Fornasari said. Now, bus shelters include a route map with strong BRS branding, and all buses are clearly identified, with bus lanes clearly painted on the ground.

All these efforts have paid off. Veja, a prominent magazine, wrote a headline: “It’s better to go by bus.” Survey results showed that 14 percent to 41 percent of people like the new buses, and half of those interviewed said traffic has improved very much.