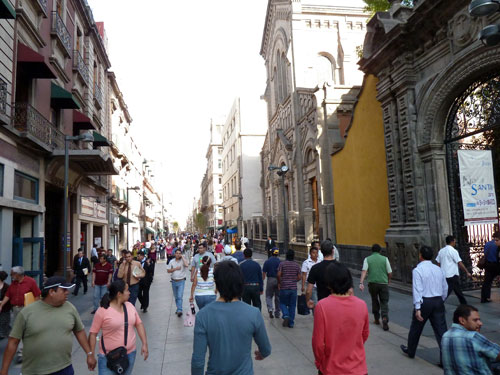 A city’s reputation is often shaped by how people perceive its center. Take New York in the 1970s. The iconic images of a seedy and downright dangerous Times Square were projected onto the city writ large. So too with Mexico City’s historic center, which contains some of the nation’s most iconic landmarks but had become neglected and rundown.

Since 2006, ITDP has worked with Mexico City to promote and provide technical advice on the restoration of the Centro Historico. In addition to the streetscape and pedestrian improvements they recommended, they also advised Mayor Ebrard that more transit would help make the neighborhood more accessible, and ultimately safer for all. They suggested a Bus Rapid Transit line that would connect the historic center with the airport and bring high quality transit to the neighborhoods west of the Centro Historico. And they pointed out how relatively easy it would be to take this line all the way to the airport, linking visitors to hotels and tourist attractions. ITDP provided assistance for a preliminary feasibility study for this line including passenger demand modeling.

The City began construction on Line 4 of Metrobus in July, and estimates it will take 6 months to complete. It will make a circuit through the historic center, running on two major north/south axes along Republica de Venezuela and Heroe de Nacozari in the north and Republica de el Salvador south of City Hall. The line will make vital direct connections to other transit including the Lines 1 and 3 of the existing BRT, the Buenavista commuter rail terminal, and both terminals of the Mexico City International Airport. The BRT is projected to reduce the travel time from the Centro Historico to the airport from 1.5 hours to just 50 minutes.

Metrobus Line 4 will have 46 Euro V, low emissions buses, and 8 hybrid buses. The buses will be low-floor, allowing passengers to board at sidewalk level, allowing for a lighter design treatment for stations, which was key for the narrow streets of the historic district.

Line 4 continues to open up transit options in the western part of Mexico City and will provide high quality, high-density transit in the Centro Historico. Over the past seven years Mexico City has made significant strides to revitalize its historic center. Metrobus Line 4 will make it easier and more pleasant than ever for people to visit and see for themselves, and might just change the way they see the entire city as well.