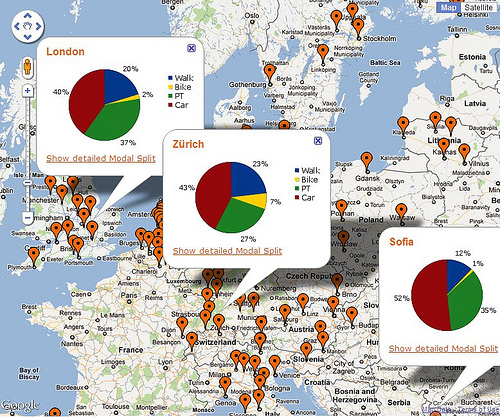 Internationally, however, 25 percent of respondents reported using public transportation daily, and 41 percent reported using it at least once a week. In both cases the international sample was five times or more as likely to use transit as Americans. Even Canadians are more than twice as likely to report weekly or more transit usage than Americans; Russians are over ten times more likely. shopping center parking lot, suburban virginia (by: Mrs. Gemstone, creative commons license)In another part of the study, Americans were found to walk or bicycle regularly only half as much as the full international average.

For the US, I reported some city-by city comparisons of commuting habits based on 2008 data. As would be expected, New Yorkers were the most likely to take transit to work (54.8 percent) and the least likely to drive alone (23.3 percent). Washingtonians were number two in both categories (35.7 percent and 37.2 percent, respectively). Residents of Boston and Washington were the most likely to walk to work (14 percent and 12 percent). At the other end of the spectrum, fewer than one percent of residents of Oklahoma City take transit to work. Collectively, an overwhelming majority of American city residents (74 percent) drive alone to work.

A new, interactive website launched by the European Platform on Mobility Management displays easily retrieved data for individual European cities. (The Platform is a network of European governments, represented through their transport ministries and organized as an international nonprofit organization headquartered in Brussels.) Not all European cities are represented (at least not yet), but many are. For example, here’s what I found just looking at the three cities shown on the map at the top of the post:

The good news is that analysts now have a convenient new source to turn to for comparative data on transportation habits in various cities. The bad news, for Americans, is that our own transportation habits are environmentally pathetic by comparison, using far more oil, emitting far more carbon, and requiring far more expensive infrastructure, than those of Europeans. Unsurprising, I suppose, but not exactly uplifting. We are moving in the right direction, it seems, as I wrote yesterday, but we have a lot of catching up to do.

The European database appears very much a work in progress. There are important cities yet to be included (Rome, Barcelona), and some of the interactive features are clunky. Eric Britton of World Streets points out some of the limitations in an article introducing the system, though he is positive as to its usefulness and potential. There are ways for users to submit additional data. But the site is already useful and interesting, and likely to get better over time.