Opinion Pieces: For whom the bell tolls

At the recent Colloquium in Canberra I spoke on the topic of infrastructure as a network system and not as a series of potentially disconnected projects in corridors. Prior to my talk I had raised a question in discussion time on the missed opportunity, through the public-private partnerships in toll road concessions, to require under contract the provision of dedicated lanes for buses throughout the entire length of all tollroads. The speaker who was the general manager of a tollroad company responded by telling me that buses do not work well on tolled roads because they need bus stops for the travellers who would need to get on and off at frequent intervals. He went so far as to suggest that buses are best as modes to feed trains and to not be considered as viable options on tollroads. Fortunately I was not the only person who found such a response quite amazing and wrong. He missed the point entirely that some of the most successful bus services in terms of patronage growth are those that deliver passengers over long distances (for example the Hills service between the Hills District and the central business district in Sydney).

The figure below shows very clearly, admittedly schematically, that buses can make a high difference to delivering long-haul metropolitan public transport, at a high value of money to the taxpayer which operate as both feeder and truck. What is missing in most Australian cities is a decent road network to be able to support much higher levels of service that buses are capable of delivering. 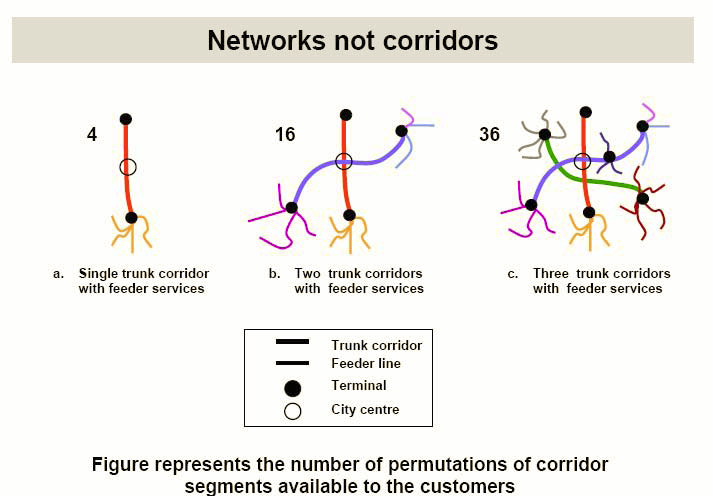 This should resonate will with the growing focus on infrastructure. No longer is the bus operator the constraint; it rests centrally in the inadequate interface between the ability of operators to do what they do best and the road infrastructure they are offered to perform on. Network planners will advise that successful network structures should be consistent with branching structures, overlaid express services, bus stops/stations located offcorridor and direct connections. Tollroads should be seen as crucial to this network solution since in recent years they offer the greatest prospects for a truly multi-modal corridor that can accommodate a greater amount of public transport activity over longer distances than any other public transport infrastructure project.

The message herein is clearly in support of bus-based public transport that can deliver service levels, as high, if not higher than conventional views about rail. Value for money is assured. Unfortunately my views will again be described as those of a bus-lover. How sad, since the mode is really irrelevant in the search for the best accessibility outcome per dollar outlay. In introducing my talk in Canberra I made a plea to have the audience remove its modal bias and listen to the arguments and evidence. Sadly I suspect that is impossible.