For some time I have felt a need in Australia to have a regular survey of the opinions of residents of Australia in regards to transport. We have ongoing surveys of consumer sentiment (e.g., the Westpac survey), but no record of how society views developments or the lack thereof in the provision of transport infrastructure and services. ITLS decided to do something about this and in 2009 we developed a methodology, joined in partnership with Interfleet Technology and launched the quarterly survey on March 23rd. In time we can build an informative and influential profile of opinions every 3 months from a sample of residents throughout the country on transport matters that they have views on.

Transport Opinion Survey interviews are conducted by Taverner Research by telephone using trained interviewers. Telephone numbers and the household response are selected at random. The quarterly survey is based on 1,000 adults aged 18 years and over, across Australia. This survey was conducted over 13-28 February 2010. The data reflect Australia’s population distribution.

Since the readers are public transport people you will be interested in the following graph.

What do you think is the highest priority issue for transport in Australia now? 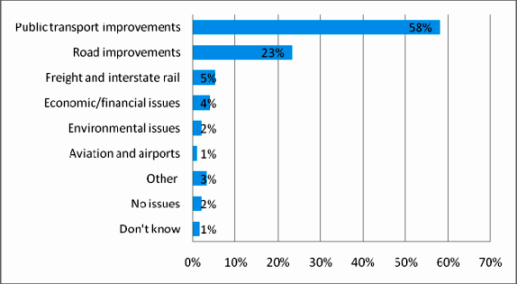