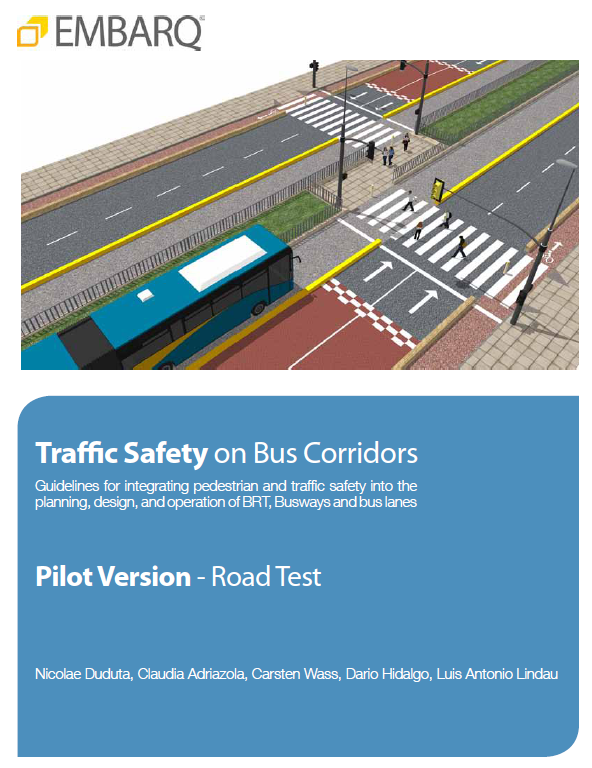 WASHINGTON (May 30, 2012) – Each year, 1.2 million people die in traffic crashes, according to the World Health Organization, and traffic fatalities are projected to become the fifth leading cause of premature death worldwide by 2030, ahead of HIV/AIDS, violence, tuberculosis, or any type of cancer. One way to prevent many of these deaths and injuries is to improve traffic safety, especially on major bus corridors in cities. EMBARQ, the World Resources Institute’s center for sustainable transport, today released the draft “Traffic Safety on Bus Corridors” guidelines to improve traffic safety on bus corridors worldwide. Based on more than two years of research, the guidelines are part of the Road Safety in 10 Countries (RS10) project, funded by Bloomberg Philanthropies.

“This guidebook is part of a broader effort by EMBARQ to illustrate how sustainable transport projects can greatly improve traffic safety, and ultimately, save lives and improve quality of life for people around the world,” said Holger Dalkmann, director of EMBARQ.

The guidelines are based on findings from a two-year research project, led by EMBARQ, which evaluated safety, operations and accessibility on major bus corridors and bus rapid transit (BRT) systems in 18 cities around the world. Key findings show:

“BRT and bus routes are often located on major urban roads, which have the highest concentration of traffic crashes in cities,” said Claudia Adriazola, director of EMBARQ’s Health and Road Safety program. “A new BRT system can attract a lot of pedestrians to these areas, so it is crucial to help cities understand how to maximize safety for everyone on the road.”

The purpose of the draft planning and design guidelines is to provide bus agencies, local jurisdictions, and regional and international organizations with a set of suggested design, planning, and operational criteria for bus systems, including BRT corridors. The guidelines include recommendations for street design, intersections, stations, and station access, as well as transfers and terminals.

“Data has shown that after the implementation of some BRT systems, such as TransMilenio in Bogota or Macrobus in Guadalajara, crashes and fatalities on these corridors dropped by as much as 50 percent,” said Dario Hidalgo, director of EMBARQ’s Research and Practice, member of our Centre of Excellence and an author of the guidelines. “Not all bus systems have had a positive impact on safety, and in some cases, there is still considerable room for improvement, which is why EMBARQ developed these guidelines to improve traffic safety.”

The research included iconic BRT systems in places like Curitiba and Bogota, Colombia, megacities Mexico City and Rio de Janeiro, as well as examples from New Delhi and Ahmedabad, India, and Brisbane, Australia.

“Our research shows that the design of a bus corridor can have a significant influence on the frequency of crashes on the street,” said Luis Antonio Lindau, president of EMBARQ Brazil and member of our Centre of Excellence, who contributed to the research.

During the next six months, experts are invited to provide feedback on the content, methodology, feasibility, and usefulness of the safety recommendations. The feedback will be incorporated into the final version of the guidelines, to be released in 2013.