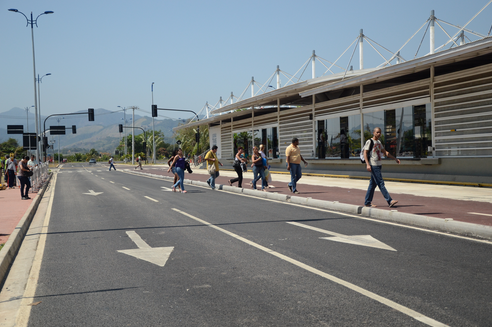 People avoid the zebra crossing and walk on the road and along the BRT corridor. Photo by EMBARQ Brazil.

During the first week of September, a group of 20 EMBARQ specialists and international experts visited the Transoeste bus rapid transit (BRT) corridor in Rio de Janeiro to analyze the road safety conditions of the stations, the corridor, and its surrounding areas.

EMBARQ network staff worked together with road safety expert Carsten Wass on a road safety inspection to help decision makers identify safety issues along the BRT corridor and stations. The goal was to propose effective measures to reduce the risk of crashes and save lives.

A formal document of analysis and recommendations will be delivered to the city’s Secretary of Transport.

On the first day, the experts visited Transoeste’s Center of Operations and analyzed data about the crashes in the BRT area. Later, they were divided in three groups, each of them responsible for a stretch of the corridor, for field analysis on the following days. During the field inspection, the groups talked to technicians from Rio de Janeiro’s Municipal Secretariat of Transport and Rio’s Traffic Agency. At the end of each day, the three groups gathered to list and discuss the main safety problems found along the corridor.

The experts had an official meeting at Rio’s Municipal Secretariat of Transport to present the problems identified during the inspection and make recommendations for safety improvement.

The meeting also included EMBARQ Brazil’s President and member of our CoE, Toni Lindau, and the director of Strategic Relations and Development, Rejane D. Fernandes.

Carlos Maiolino, Rio’s Sub-Secretary of Transport, welcomed the group. Carsten Wass facilitated a presentation to sum up the main problems found by the technicians.

Maiolino thanked EMBARQ for the inspection and committed to do an internal evaluation based on the final report’s recommendations. “The areas that present risk to people’s safety will be reviewed and transformed,” he said.

EMBARQ Brazil conducted a road safety audit of Transoeste corridor in 2011, when the corridor was still in the design phase. Since then, the project has improved. After the system was launched, new challenges related to safety arose.

“Transoeste is an incredible system, that is integrating a part of the city. But we noticed it needs some little adjustments, especially focused on people,” said Claudia Adriazola, EMBARQ’s director of Health and Road Safety.

“It’s a unique chance to have so many experts, coming from all around the world, to exchange knowledge. It is an important work”, Carsten Wass said.

Avenida das Américas, the street where most of the 56 kilometers of Transoeste are installed, is traditionally one of the roads with the highest number of crashes in the city of Rio de Janeiro.

In 2011, before the BRT was implemented, Avenida das Américas registered 15 fatalities and 742 injuries.

Although the BRT system has been organizing the traffic in the area, crashes still happen. Local inhabitants are not used to the new system and behave in a dangerous way. For example, pedestrians walk in the BRT corridor; cyclists use it as a cycleway; drivers do not respect traffic lights and zebra-crossings; and many pedestrians cross the street in risky areas. Also, the design of stations and the corridor have gaps that make it easy for people to adopt risky attitudes.

“People know what they have to do in traffic. For example, they know they shouldn’t cross when the light is red, but they do it because sometimes they do not measure the danger. For this reason, there must be physical barriers to prevent them to take risky attitudes,” said Adriazola.