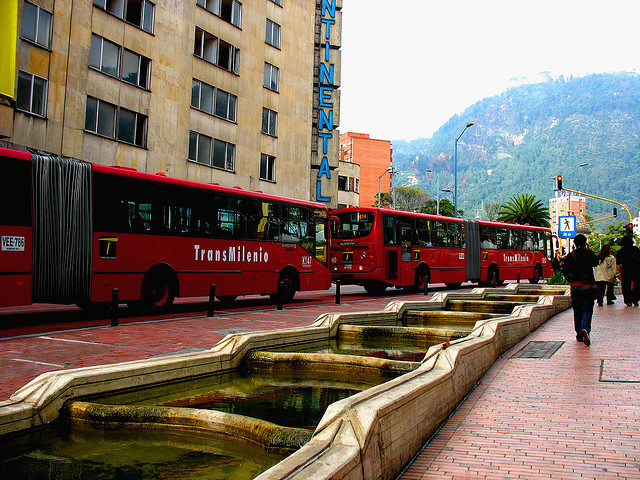 Eje Ambiental, translated as the “environmental axis,” is now a prominent part of TransMilenio’s BRT system. Photo by Lauro Oliveros.


Prof. Shivanand Swamy, a faculty member specializing in public transit planning and bus rapid transit (BRT) at the Center for Environmental Planning and Technology (CEPT) University in Ahmedabad, India visited Bogota, Colombia on November 15-19, as a speaker at the fifth annual International Fair of Mass Transport, organized by Corferias and TRANSMILENIO S.A.

Prof. Swamy has been providing direct advice to the Ahmedabad Municipal Corporation on the design and operation of the award-winning Janmarg system, the first full BRT system in India. Janmarg adapted several concepts introduced in Latin American BRT corridors to the local conditions of Ahmedabad’s urban characteristics and user needs.

I had the privilege of traveling the TransMilenio system with Prof. Swamy and answer many of his questions regarding infrastructure design and operations. The visit also gave me the opportunity to experience corridors and areas of the city that I do not have the chance to visit often. This is a short description of our trip.

We started the “safari” in the historic downtown, in a facility known as “Eje Ambiental” (“environmental axis.”) It used to be a small river and was buried in a tube in the early 1930s to build Avenida Jimenez, one of the first two-lane arterials of the city. Between 1997 and 2001, Avenida Jimenez was converted into a transit mall, just for pedestrians and buses. Three stations of the TransMilenio BRT system were opened in 2001, connecting the busy Avenida Caracas busway with the east section of downtown. The area has many universities and government institutions, demanding many transit trips.

We entered the TransMilenio system in the terminal station of Las Aguas and headed west through Avenida Jimenez/Calle 13 and Avenida Americas busways. Avenida Americas was the first expressway in the city, built in 1946 to connect the airport and downtown. It has a very wide right-of-way and goes to one of the most dense residential areas of the city, Kennedy, named after the president of the United States, who inaugurated a residential development in this area in 1960. We passed through an intermediate integration station called Banderas, close to a monument of the same name, which has the flags of all the American states that met in Bogota in 1948 to create the Organization of American States. The busway connects with Avenida Cali to reach the America’s Portal, the busway terminal in the west of the city. It is a very large terminal, connecting feeder and regional buses, and side-by-side with one of the seven bus depots of the 84-kilometer system. It has a very heavily used bike parking facility for 1,500 bikes, showing some intermodal integration.

While Avenida Americas is wide, Avenida Cali is narrow (only 40 meters), with just room for two busways lanes, two general traffic lanes and a very busy bikeway, which has the largest concentration of cycle rickshaws in the city (just as in some areas in Ahmedabad.) The area is middle- and low-income. Close to the terminal is a CADE, a one-stop shopping place for citizens to do business with official local, regional and national entities (i.e. to pay utilities, pay taxes, file complaints, obtain permits, etc.)

We took a feeder bus to Metrovivienda El Porvenir, a social housing complex with full urbanism (paved roads, well designed sidewalks, bikeways, parks, schools and social services, and even retail.) It shows a sharp contrast with the surrounding neighborhoods, which still have unpaved roads and a lack of sidewalks (despite some interventions by the city.)

It was quite an interesting trip. We even had the opportunity to talk with passengers on the buses who were surprised to see an Indian professor go to the extremes of the city to study TransMilenio and the housing complex. They welcomed us and informed us that this was the best neighborhood of the city. We returned to downtown in a busy express bus, full of night college students.

I experienced the good, the bad and the ugly in the current TransMilenio system. The “good” was the fast, convenient ride and the very short wait. Given that we used an express service we covered 25 kilometers in just 40 minutes. We had the opportunity to see people with disabilities easily using the system because of TransMilenio’s compliance with accessibility regulations. It was also good to see the “complete streets” with sidewalks and bikeways along the way. There were some issues with the maintenance of the road and the plaza outside of America’s Portal.

The “ugly” was the very high occupancy of the buses reaching downtown and the delay to cross Carrera 10, now under construction to be turned into a new trunk way. I just hope the new city administration looks carefully at these issues and works to improve and expand the TransMilenio service. Despite the few necessary improvements, TransMilenio is still one of the most amazing mass transit references for transit planners like Prof. Swamy.