For the first time, the BRT+ Centre of Excellence with the cooperation of the World Bank organized a Workshop gathering academics, policymakers and stakeholders of African public transport systems, in Dar es Salaam to discuss opportunities and concerns of how BRT is being implemented in African cities.

One of the goals of the BRT+ Centre is to provide support for successful deployment of BRT and spread the knowledge of our research to society. The Centre has a specific focus in African cities because we are at a critical moment in public transport development in Africa. The momentum is starting to build towards improving public transport systems in African cities, with several projects targeting a mix of new infrastructure and enhanced operational or regulatory regimes being planned or implemented. Investments in new Bus Rapid Transit (BRT) systems have been largely inspired on similar systems in Latin America and elsewhere, with various amounts of modifications in response to local conditions. Experiences with these systems have been mixed, in terms of operational and financial performance, governance of the operators and capacity building.- thus raising questions about the need for further adaptation of BRT concepts to the realities of the land use, travel markets and governance of African cities. The incorporation of the University of Pretoria to the BRT+ Centre is a strong step to address some of these issues.

On Friday July 29th the Centre gave another step in this direction by organizing a Workshop to take stock of the experience in urban transport modernization in African cities, specifically with regard to BRT implementation, with a view to strengthening the appropriate roll-out of public transport innovations in Africa in coming years. The specific objectives of the Workshop were:

The focus was on African cities, but the outcomes were intended to be relevant to other parts of the world facing issues of technology tailoring in the transport sector. The Workshop took place in Dar es Salaam right after the Mobilize conference that took place in this city to celebrate it as a recipient of the Sustainable Transport Award.

Dar es Salaam is the largest city in Tanzania, and like most developing cities in the world, its transport system faces many complexities and challenges. On 2016 Dar es Salaam opened the first BRT in East Africa by the name of DART with some significant innovations as its bus-only streets entering into Dar es Salaam’s downtown. DART has rapidly become the backbone of the transport system in this city.

As the city grows rapidly DART aims to become the central service for the citizens to move across the city. It expects to provide a high-quality service and support the urban sustainability efforts to hinder car use. Nowadays DART has completed its first of four phases with 21 km of exclusive bus lanes and a capacity to serve 400,000 travels per day. The next three phases should open possibilities to increase transport capacity and the opportunities for people to move around Dar Es Salaam 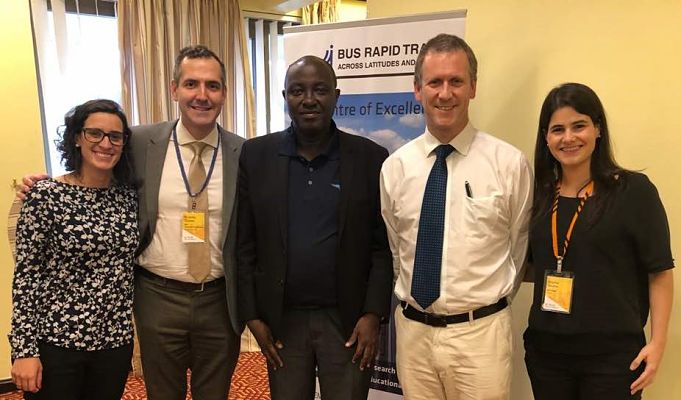 Several researchers of our Centre participated at Mobilize and then gathered with authorities and public servants from several African countries (Kenya, Nigeria. Rwanda, South Africa and Tanzania) in a very honest and deep conversation. Several issues were raised, as to improve the reliability of transportation demand models; Investigate improved trip data collection methods, especially smartphone-based technologies; Investigate & understand passengers travel preferences & impacts on system designs & operations; Reduce CAPEX of systems by looking at alternative designs and operating models & methods; Improve the economic appraisal process (including wider economic benefits) to motivate funding Evaluate options for first and last mile accessibility to BRT stations, including hybrid-operations; Investigate how to make systems accessible and attractive across income groups; Better integrate all transit systems in cities; understand how to include incumbent operators into the new BRT system.

The former Director of BRT+ Juan Carlos Munoz, commented that the discussion in the workshop “raised several issues that the BRT industry must address to become the mobility solution it promises for African cities. Since African cities still have very low motorization rates, BRT should take advantage of many opportunities that developed cities do not face. Also, these cities must consider its design very carefully to attract passengers that are currently served by the very affordable informal public transport. Affordability is extremely relevant since many take a long walk in these cities to reach their destinations The BRT concept is quite flexible, and its flexibility should be incorporated in the analysis to determine how it should best fit the needs of the citizens.”